It’s 4:30am, Sunday morning. I should have been sleeping.  Instead, I’m fully awake. My heart was pounding rapidly behind the starting line on the race track of the Marina Bay Street Circuit – not far from the pole position where drivers such as Lewis Hamilton and Sebastian Vettel would eagerly await the flag-off of Singapore’s annual Formula 1 Grand Prix. 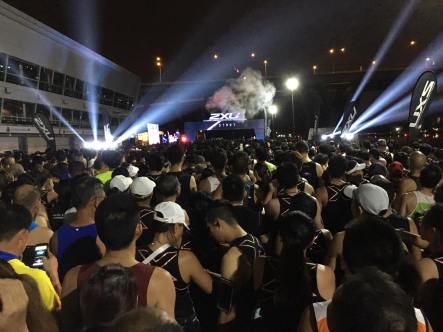 Only this time, it’s a night race of a different kind.  Right beside me, was Jacqueline, my run-buddy who got me to sign-up for a half-marathon at 2XU Compression Run 2017.  She looked all psyched up to clock another personal best.

In contrast, I’d be glad to complete the race under three hours.  Even if my heart could take the beating, I doubt my legs could.  Honestly, running isn’t my thing.  I might begin to enjoy it had I been 10kg lighter.  I much prefer swimming, where my weight is partially carried by the water.

The music was loud and the DJ was screaming away.  But I couldn’t care to listen to what he was saying.  I glanced at my watch and tried to work out the likely time that I will cross the finishing line.    That would be 7:30am, and the sun would be up by then.

Anticipating the flag-off, a question suddenly popped up in my mind: “How did I end up here?”

About six months ago,  Jacqueline sent me a WhatsApp message.  It’s a photo of the race accompanied by a message: “R U interested to go for this event next yr?”

What was I thinking? My usual runs typically last no more than 5 km. And I don’t even like running.  Perhaps, timing is everything.  The message came at a time when I was experimenting with the notion of “Say YES to Life.”

What began with a simple “OK” led to not just one race, but three races in three consecutive months.  The first was Run For Hope 2017 in February, which I ran with a colleague who successfully battled cancer last year, and still completed 10 km fifteen minutes ahead of me.  That was followed by OSIM Sundown Marathon 2017 in March, which I

completed together with Dylan.  It was partly an opportunity for father-son bonding, and partly to make sure I covered another 10 km in preparation for the half-marathon in April.

Looking back, I’m glad I did those two preceding runs, without which, I wouldn’t have run 21 km with relative ease.  Interestingly, when the mind is fixed on a goal of completing a half-marathon, 10 km felt like a warm-up.  And once the body could handle 10 km, 21 km seemed achievable.  That’s the merit of raising the bar and stretching ourselves.

Now, a full marathon might be a stretch for me, but possibly merely a ‘warm-up’ for an ultra-runner.   There’s one thing that I like about solo sport such as running and swimming.  Ultimately, we compete against no one, but ourselves.  It’s about going faster or further than our last best, and not needing to worry about others.  As novelist Harumi Murakami wrote in his fascinating memoir – What I Talk About When I Talk About Running:

“In long distance running, the only opponent you have to beat is yourself, the way you used to be.” 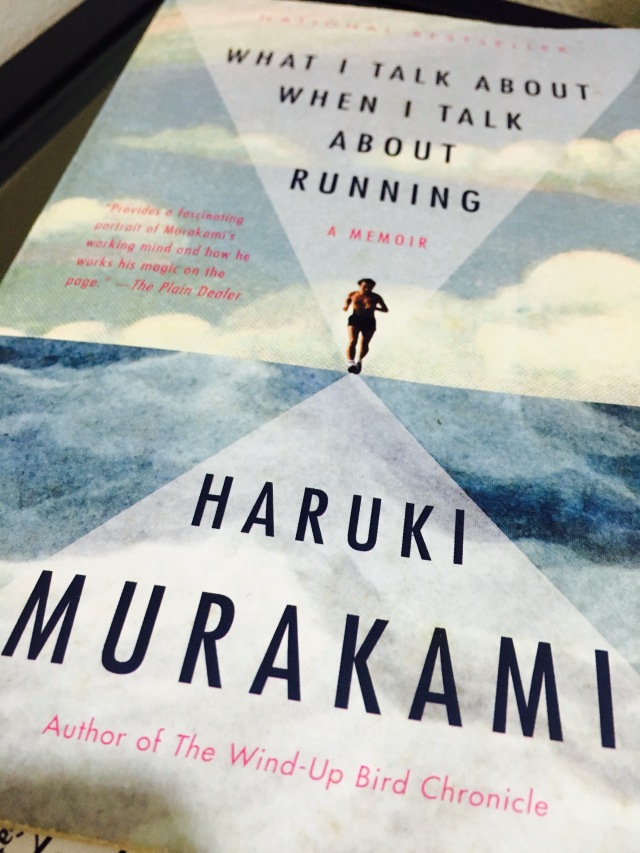 In short, we each run our own race.

Similarly, in life, we live our own adventure, and play our own games.  No need to keep up with the Joneses. No need to compare our achievements with others.  No need to look better or be more successful than our peers.  After all, most people don’t care about how happy or successful or good looking we are. They care more about themselves. And rightfully so.

A night race offers an extraordinary experience.  The scenery is spectacular.  The air felt fresher and cooler, especially after a brief drizzle that gave the tarmac a slightly wet polish.  For an amateur runner like me, three hours of running is a very long time.  The random songs from my Spotify playlist and the occasional stats from RunKeeper kept me going.  Most of the time, my mind wandered freely to all kinds of interesting places.

Some times, it drifted back to the past, serving up fond memories of adolescent years.  At other times, I pondered about the present issues at work, and thought about what I need to do in the future.

I’d wanted to capture those random musing while running.   Perhaps, I could have chatted with Siri and have it all recorded.  But I was too busy having conversation with myself to think out of the box.  It’s a silly thought … but I felt as if I was ‘blogging’ on the run.  Inspired by Murakami, “What I Think About When I Am Running “sounded like a good title for my next blog.  However, that was soon drowned out by a self-critical inner voice.

Who on earth would take an interest in what I think about when I am running?  Murakami is a famous novelist, a talented writer. I’m a nobody – just an amateur runner, a writer-wannabe.

Anyway, here are some recollections from the night run …

Murakami picked up running shortly after he decided to be a professional writer.  Sitting all day at his desk, he began to put on weight and smoking heavily.  He quickly realised that if he wanted to have a long life as a novelist, he would need to find a way to keep fit and maintain his weight.  But that’s not why I ran.

I started jogging recreationally at the age fifteen.  For me, running was a cure for boredom, a way to kill time during the year-end holidays.  Almost every day, rain or shine, I would follow a trail that leads to the top of a hill, and be rewarded with a panoramic view of my hometown.

Gradually, it became a social thing.  I began to make friends with other joggers, mainly girls from other schools.  But what sustained the daily trail run wasn’t the girls.  It was the runner’s high I got after the workout.  Today, neuroscience tells us that the feel-good effect is attributed to the release of endorphin – a chemical that the body produces which acts like morphine (yes, running can be addictive too).  I also love the sensation of sweat dripping on my skin, and the clarity of sight and thinking that came along with the physical pleasure.

Looks like pain might have motivated me into action.  But it’s pleasure that helped sustain the effort.  Boredom can be a good motivator, and endorphin makes it stick. No pain, no gain.  And no gain, no way to sustain.

From adolescence, my mind then drifted to a casual conversation with some old friends about new year resolutions at the start of 2011.  We were all in our early forties, and thought it’s about time we started to pay attention to our health and fitness.  “Let’s start with doing a 10 km run together,” a friend suggested.  We agreed to sign up for the Standard Chartered Marathon in December.  That would give us a year to train and get ready.

However, after much procrastination, by the time I visited the website to register, the space for 10 km event had already ran out.  I was left with either the half or full marathon.  Obviously, I chose the former.  Consequently, over the year, I gradually picked up running again.  Some people are natural born runner.  I am not. I knew that if I didn’t condition the body, there’s no way I could survive the feat.

Finally, the race day came.  Despite regular training, the journey was utterly painful.  I had to pull over a couple of times and lie down on the floor to stretch my aching back.  Of course, I stopped to take lots of selfies to document my maiden run.  “No pain, no gain,” read one of the signs.  I could certainly attest to that. Punching both fists triumphantly into to air as I crossed the finishing line, I felt as if I had won the race!

In the end, the pain was all worthwhile.  But, why did I put myself through the ‘torture’?  Did I have something to prove?  Friedrich Nietzsche once wrote, “He who has a WHY to live for can bear almost any HOW.”  Similarly, in his famous TED Talk How Great Leaders Inspire Action, Simon Sinek spoke about the importance of starting with WHY.

What was my WHY for running?  The answer wasn’t apparent at first.  And I noticed that the answer changes depending on how the question was asked.  There is a subtle distinction between “Why did I want to run?” and “Why did I run?”

In other words, the reason for wanting to do something isn’t necessarily the same as the reason for actually doing it.  In this case, I wanted to run because I said yes to a friend’s request.  My motivation was simply to experiment with saying ‘yes’ to life more frequently than I normally would.  And I ran because I intended to honour the commitment I’ve made to myself and my run-buddy.  I wasn’t going to back out, even if it rained.

One part of me was also curious to find out how fast I could run.  Admittedly, I haven’t trained as hard as I had intended.  Another part of me yearned to know if I were fit enough to aim for a full marathon later in the year.   The last time I did a half-marathon, I felt accomplished, relieved, yet incomplete.  I got the finisher medal, but the finisher T-shirt was awarded only to those who completed a full marathon.  The desire to do the ‘whole nine yards’ were seeded.  Moreover, I was turning 42 soon, and that sounds like a good number to shoot for.

Unlike Bungee jumping or skydiving, where only guts and money is required and all I needed to do was to jump, marathon is different.  I know that conceptually, it’s about putting one foot over another repeatedly till the finishing line.  But completing a full marathon requires discipline, dedicated training, and a great deal of perseverance.  At some point in time, when fatigue sets in, it’s mind over body.  I have huge respect for those who have done it.  They deserve to wear the finisher T-shirt with pride.  It’s earned through sweat and hours of hard work.

A few months later, when the post-race euphoria subsided and reality set in, I gave up.  I know that where there’s a will, there’s a way.  But at that time, my will was simply not strong enough to do what it takes.   With the amount of travel I do at work, I wasn’t keen to devote that many hours of my life pounding the road with my feet.  Consequently, the desire to complete a marathon remained a dream, and faded back into my bucket list.

“Perhaps someday, when I’m lighter, I’ll give it shot,” I consoled myself.  And we all know that’s BS, and that ‘someday’ is notoriously elusive.

But this year, it will change.  I’m gonna check-off that ‘Run a Marathon’ on my bucket list by yearend.

Why? Because I’m done waiting for that someday. I’m choosing to make it happen, rain or shine.

What about you? Which item on your bucket list will you check-off this year?

This site uses Akismet to reduce spam. Learn how your comment data is processed.